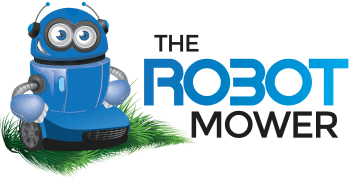 Our story of replacing a Husqvarna 450x with a Ambrogio 4.0 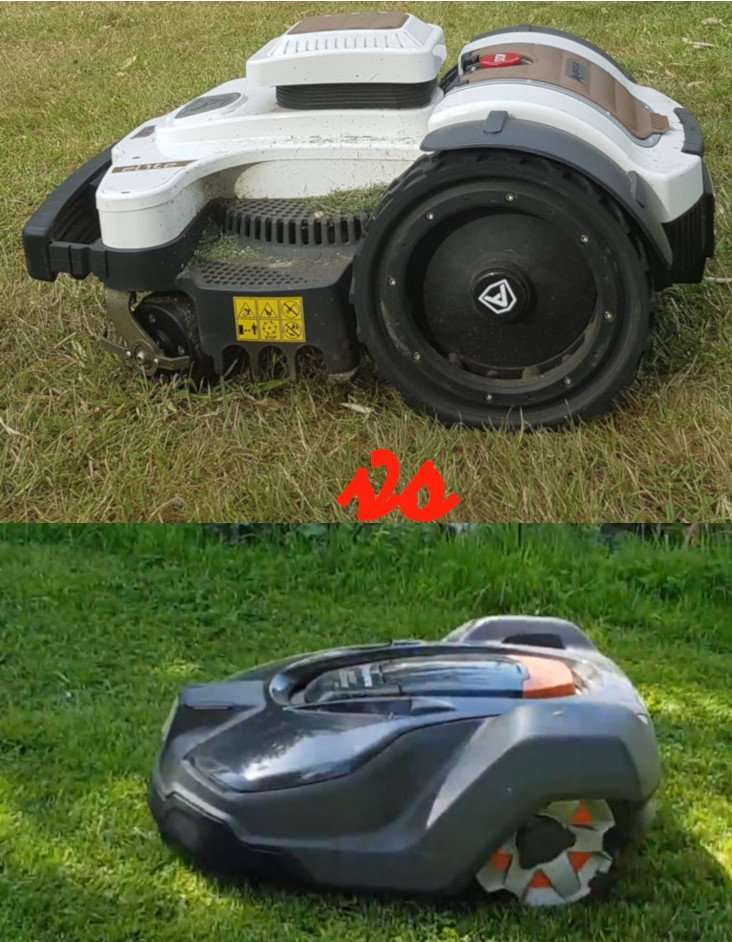 Thinking about buying a Husqvarna robot lawn mower? Find out why we moved to an Ambrogio instead.

The article below gives details of our test garden (which probably is as complex as they get), our Husqvarna installation and why we moved to an Ambrogio 4.0.

If you have any questions or need any advice, please Contact Us or leave a comment at the end of the article.

Why did we buy a robot lawn mower?

We moved into our house about 5 years ago.  One of the main reasons for moving was to have a bigger garden so our new house came with 4 acres of which 1.5 acres is grass that needs mowing so we bought a sit on mower to augment our petrol mower.

Initially the thought of driving round the garden on the sit on mower listening to music seemed appealing however, the reality turned out to be somewhat different:

The solution could have been to buy a better sit on mower or pay someone to do it but neither of those options seemed appealing so I started researching robot mowers. 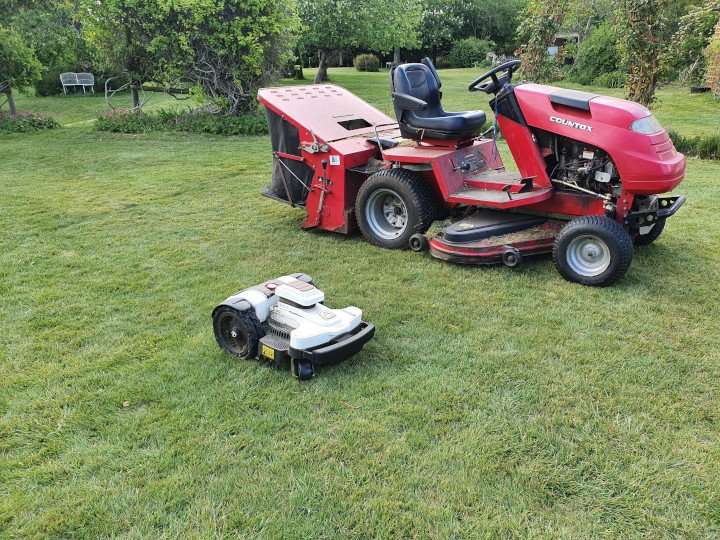 I couldn’t find any guides which covered robot mowers for large gardens  so I started my google search. I discounted most mowers as they could not cope such a large area.  In the end, we settled on the largest Husqvarna (the 450X) which was sufficient to mow just the back garden.

Having used a robot mower for a season, we decided to look again at other manufacturers and found Ambrogio which could offer a wider range to cover all the areas of our garden.

We ended up splitting our garden into 3 areas and having a mower in each, the Husqvarna was replaced with an Ambrogio 4.0 Elite –  have a look at our test garden for the other areas and mowers.

Installation of the 450X

The 450X was installed on a wet and miserable day by our local Husqvarna dealer.  We sited the base station near where we had power and where we thought it would be out of the way (more about that later).

Looking back on this, I would always recommend installing a robot mower on a dry day for a couple reasons:

Installation of the 450X involves:

About 1km of wire was used in the installation. 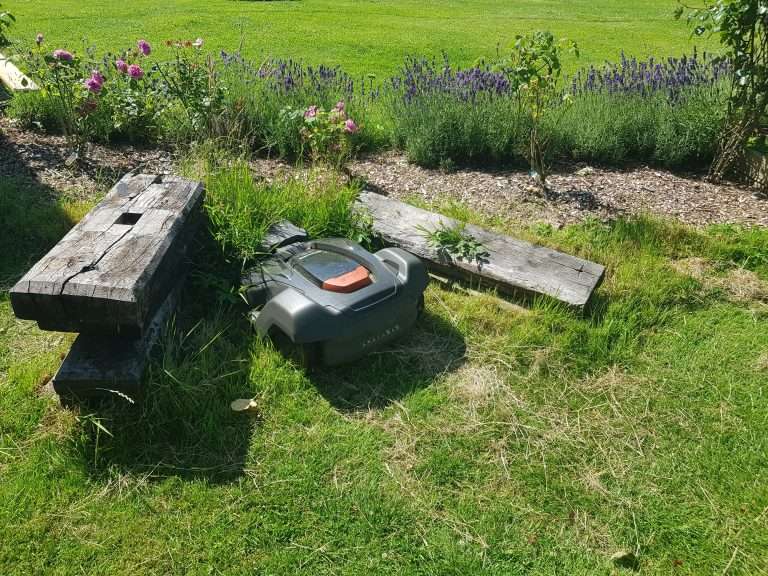 Living with the 450X

After a few weeks of sorting out rabbit holes, moving wire where it was not quite in the right place and ‘hiding’ it from passing footpath users (hence the sleepers in the photo), things settled down.  On the whole it just got on with it’s job, it got stuck every now and then (unfortunately mostly when we were away on holiday).  The app tells you where it is stuck, a useful feature, but there is not a lot you can do about it if you are on holiday.

There are just a few ‘niggles’ that we had with it: 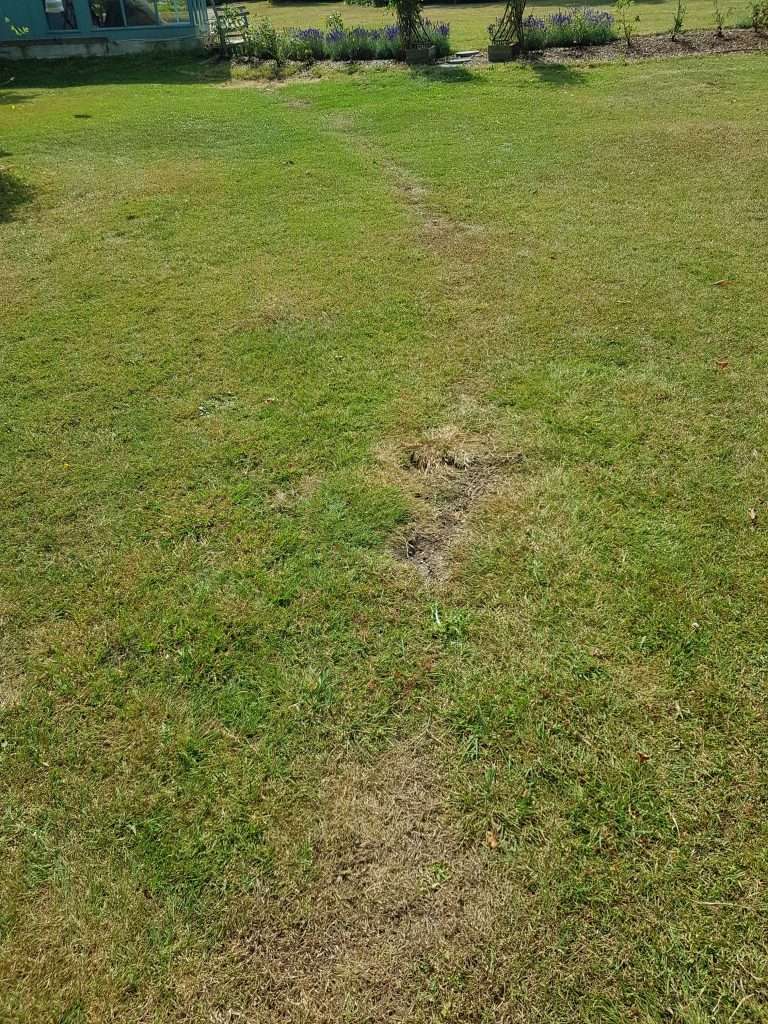 I thought that the grass would recover but over a year on and after a dry spell, the tracking lines are still visible.

In some ways the Husqvarna became a victim of it’s own success.  We had numerous friends who came over and said that they had never seen a robot mower before or didn’t realise that it could handle large complex gardens.

We started looking at the possibility of setting up a company to sell and install robotic mowers in our local area. Having looked at various makes, we settled on Ambrogio as it offered a larger range of robots than Husqvarna and could cope with much larger lawns.  It was also had an expanding dealer network with no coverage in our local area….The Robot Mower was born.

I think that any robot mower dealer should have first hand experience of using them so one of the first jobs was to replace the Husqvarna with an Ambrogio 4.0….it looks like a robot (or a tank at least)!

We spent some time looking at the possibility of running the Ambrogio using the same perimeter wire as the Husqvarna, in the end we decided that it wasn’t the best solution for a number of reasons:

Removing the 450X was as simple as disconnecting the base station and removing the visible perimeter and guide wires…or at least we thought.  With 1km of burried wire, it’s difficult to find  and extract all the wire.  One reason why I now take a video following the perimeter wire after an installation making a note of spare wire, joins etc.

Installation of the Ambrogio 4.0

We decided to locate the base station in a different area which offered protection from prying eyes and was located on the lawn that we wanted mowed first.

We decided to tweak to mowing areas:

The Ambrogio robotic mowers navigate to areas of the lawn in a different way to the Husqvarna.  They follow the perimeter wire either clockwise or anti-clockwise for a given distance before starting cutting. This makes it easy to define new areas…you just add them to the app.

In order to minimise tracking issues, Ambrogio have a specific technique that allows the robot to follow the wire but stay a varying distance away (up to 1m.). This works well but requires a bit more planning as if you have a passage less than 1m it could skip it.  To get around this issue, you can put in ‘recall to wire’ points to allow the robot to follow the wire through tight spaces/ passageways.

Living with the Ambrogio 4.0

The first issue we hit was that the mower would not come out of the base station correctly…pretty major but after some investigation we found that the signal from our other mower was interfering with it.  Swapping the channel that it was transmitting on solved the problem.

We were a bit worried that we had tried to push the edges a bit too far and that it might not cope with the uneven expanded area but the 4.0 has coped very well, the pivoting body allows it to cover areas that the 450X would not have coped with and the cut is more even than with the 450X.  All in all a good start. 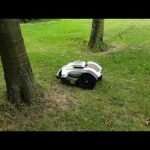 Cutting among The Trees 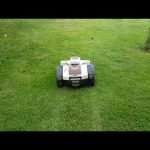 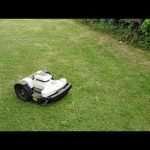 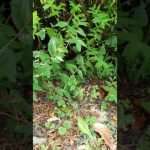 So, we have been running the Ambrogio 4.0 Elite, L35 Deluxe, L60 Elite and Twenty Elite for a while and we are now in a position to compare them.
Read our blog entry A User’s perspective to find out more.
If you have any questions, Contact Us, we’re here to help (as well as sell you the best mower for your garden).

Copyright © 2021 Daily Robotics Ltd. All rights reserved.
Icons made by Freepik from www.flaticon.com